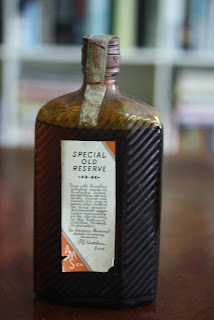 The above photo is of my grandfather's Prohibition bourbon. We inherited cases of it. Each bottle was government-issued and came in a green box labelled "For Medicinal Purposes Only." I successfully medicated myself with the stuff.

It’s not that uncommon for folks to use a bit of psychoactive help to meet deadlines. Nowadays it’s Adderall. In my Dad’s day, it was a Judy Garland cycle of bennies and barbs (benzedrine and barbiturates) that got him through law school. He may not have believed in God but throughout his life he worshipped at the altar of prescription drugs.

Maybe that’s how I inherited my little problem, though, unlike my father, I didn’t draw the line at illicit drugs.

And my deadlines in 1976 were punishing. From the time I began work on my novel “Dry Hustle,” fortune shot me like a cannonball into the career heavens. Before I was half done writing the book I had a deal with a mini-major Hollywood studio to write the script plus direct the film adaptation. In order to meet the schedule I had to finish the book in four months, complete the screenplay in the next three, then shoot the movie and deliver in time to coincide with the hardcover publication.

Simply drinking Irish coffee didn’t work anymore. I’d never been able to afford cocaine, which was a good thing, but there was a coke dealer living a few doors down from my rented crib on the Pacific Coast Highway in Malibu, so I took to running over now and then for a freebie. Eventually I became non grata, so I talked my gynecologist into a prescription for diet pills. Pretty soon I was climbing the walls: awkward if you’ve got a typewriter.

I did make the book deadline. The novel reads now as if it was written in a white heat, but the reckless, breathless drive of the prose matches the subject matter of life on the lam. I turned to the script assignment, intending to fly through it on wings of amphetamine. However a script, unlike a novel, is a mechanical piece of business. The writer assigns shots and locations, action and effects, along with the drama. The prose is all punchy directions – sort of barked – while somehow keeping the flow. It didn’t help that I had no idea how to write a script. I’d never even read one.

Halfway through my script struggles, I realized that I was failing. My panic, magnified by drugs, was agitating the air around me to such an extent that my pet rabbit started thumping.

Suddenly the phone receiver jumped in its cradle. I knew my dead grandfather was weighing in: Hello! Pull over! Get out of the car, keep your hands to your sides and do not reach for your drugs.

My poor bunny was now tearing around in crazed circles on the shag carpet as if she sensed a thunderhead moving in.

This wasn’t about a screenplay deadline anymore. I felt I might leave my body any second – and never be able to get back in.

I found my rabbit a nice home, packed up my typewriter and battered pages, checked into a hotel in West Hollywood, and, incommunicado, went clean. I totally gave up drugs and alcohol and also watching soaps.

For the first week I passed my days eating a lot of very large salads. By the time you were done munching to the bottom of the bowl it was the next mealtime. I did no writing. I think I was terrified that not only would I be unable to write without chemicals but also my true quivering self would be exposed to all. I would have to give up my fake flamboyant personality, revealing a shy rabbit self that wouldn’t survive long in the open.

I felt like I was looking, in fact, at the end of me. And yet if I turned back and went the other way, I was going to be dead in the classic sense.

During the second week of my recovery, the script deadline came and went. I made the naïve mistake of telling the studio the truth, that I needed a rest. When you are a wunderkind, never tell your investors that you’re shit out of wunder.

I spent a lot of time reading in bed. I don’t know what made me buy a paperback about Bridey Murphy, except that I like spooky stuff. Bridey Murphy was a famously controversial case of an American woman in the 50’s, who under hypnosis described in detail a past life in 19th century Ireland. The question was left open at the end whether her story proved that reincarnation was possible.

By the time I got done reading the book I was tired enough for sleep. As I put the book aside, I felt the mattress move underneath me, rippling. With every wave, my head was forced harder against the wood frame until something had to give. A final convulsion pushed me through the barrier and I was released. The movement stopped, and I found myself panting with relief on the bedspread, in exactly the same position as before.

Ever since my contact with my grandfather and things paranormal had begun, I privately worried that there was some psychoactive agent to blame, even when I’d only ingested something mild like coffee or beer. Or maybe I'd been just dreaming.

But here I was, fully awake and cleansed, full only of salad. I couldn’t dismiss what happened as a hallucination; the physical sensation, the propulsion, had been too strong. And what did it mean?

Suddenly I realized what the sensation really was. I’d been in the contracting and rippling birth canal, being pushed head first through the bone cervix. I’d been reading about reincarnation, and then I was reborn.

And so I was, from that time forward. But first had to come the shuttering of the past life. I turned in a 200-page script. The studio head refused to read it until I cut 70 pages. I was exhausted, and I could tell he’d lost interest in the project and in me. I counted out 70 pages in the middle of the script, ripped them out and handed it back.

I began my next life with a whimper, back at my parents’ place, in the mud of March, contemplating the debris of my might-have-been film career. Humility is not fun, especially without a menu of harmful substances helping your slide into the much funner state of self-pity. There was nothing to do but wait for my book to come out in May.

Things were eerily quiet. I found myself staring at my abandoned piano. I asked Grandpa, why do you bother with me, anyway? And the music you made me write: what was all that for?

I shouldn’t even be talking to him, I thought. That was all in the madness of a previous lifetime.Soon April arrived, and I got a call from my agent. “Do you have anything for a musical?” he asked.

“I don’t know, some songs or whatever. I met a couple of young guys who are just starting a new division for Joe Papp at the New York Public Theater. They’re looking for material for musicals.”

“I have five songs. But they’re for kids.”

“They might respond to that. Joe’s got a hit show on Broadway right now with ‘Runaways.’ That’s an all-kids cast. Let me get you a meeting.”

I hung up and opened the piano lid.

Note to all readers: this is my last post before the holidays. But I leave you with a little music of Grandpa’s. This is a recording of a song he wrote in 1922, which I only recently discovered. It’s a children’s song. Of course.

The lyrics are anonymous, from an old children's book.

Catchy title, no? Makes you want to read on? It's the title of a cantata written by my grandfather. Here is an excerpt below. You may appreciate his way with melody in this radio broadcast of 1913. Unfortunately the hilarity of the title overwhelms the music, which could be called, um, wet. (The libretto is based on Matthew 12:1 - 13, The Parable of the Ten Virgins as told by Jesus.)

The Foolish Virgins by Marshall Kernochan

Posted by Sarah Kernochan at 4:46 PM