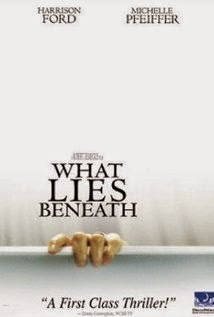 
Spielberg had a one-line idea for a movie: a mother, who’s struggling with loneliness after her kids’ departure for college, suspects there is a ghost in her house. To flesh out his story, Steven brainstormed with production heads Walter Parkes and Laurie MacDonald for several days. Nina faxed me a transcript of the meetings, so I could get a sense of what they wanted.

It was a fun read. There was clearly a lot of excitement in the room as these three movie machers spitballed ideas. (I’d love to quote some of the dialogue, but this was 1995, when fax machines used that quaint roller paper where the printed text vanishes like disappearing ink after a few years.) Notably, they wanted to defy horror movie convention by designing a ghost that was not threatening or murderous or tragic. Instead, this ghost used to be an ordinary housewife in life, who continued to go about her chores after her death. Her manifestations would take the form of, for example, the house filling up with the smell of cinnamon cookies baking, even though there was nothing in the oven. Bathwater taps turning on by themselves. Rugs rolling up. (Trash taken out?)

Further, no one believes the mother character when she insists there’s a ghost haunting the place; even her husband thinks she’s merely suffering from empty-nest syndrome. Nevertheless her relationship with the ghost deepens, as the dead housewife reveals herself to the living mother more and more openly. The two women touch across the dimensional divide, and help each other to let go and move on.

Steven was intent on making the ghost glimpses as realistic as possible. This would not be Poltergeist but rather Close Encounters of the Third Kind, to convey the awe and wonder of contact with the other side. He believed in ghosts himself but had never had any personal experiences with them, though he’d always wanted to. It was time to bring in a writer to convey that right balance of sweet and spooky onto the page.

I told Nina it wasn’t a stretch for me, because I’d had plenty of experience with ghosts. “Fantastic,” she said. “I’m going to run down the hall right now and tell Steven! He’ll be so jealous.” I was hired immediately and flew out to LA to meet everybody. In the single confab I had with Steven and the DreamWorks, they kept saying what they loved most about the story was it was so unexpectedly small and intimate.

This was October. Steven wondered if I could turn out a script in two months, because if it was good he’d like to shoot the film in February. I’d been warned by an A-list screenwriter friend that Spielberg always had a gazillion projects in development and ended by filming only one or two (and he typically didn’t release the other scripts to any buyers because if he wasn’t going to direct those films he didn’t want anyone else to, either). Still, even though eight weeks was going to be a marathon, I wanted to come through for him.

Only one thing mitigated my enthusiasm. I worried that if I began writing about ghosts I would attract them back into my life, which I’d established as a no-fly zone since my marriage. Then I’d be back in the supernatural soup, which was a lot to manage when you have responsibilities like a husband and a child and a deadline. So I sent a silent request via the ether: any spirits intending to trespass were not welcome, unless they had ideas to contribute for plot and dialogue.

For two months I was a nervous wreck, holed up in my office, deaf to my family; my daughter left claw marks on the locked door. I chain-devoured family-size bags of Werthers butterscotch, courting both cavities and gas. And though I stuck to the story concept as explained by Steven, Laurie and Walter, a thought kept nagging at me: This doesn’t feel like a Steven Spielberg movie. This was no theme park ride. It was gently spooky, a lovely lyrical entente unfolding between a needy human and a housebound ghost. Would he really abandon his usual MO to make a very small film, a miniature instead of a mega-epic?

I turned the script in on time. Initially it was greeted with congratulations and a complimentary fax from Steven (which I would also love to quote, but that paper too turned blank in a year). Then we all got on the phone together for his notes. His big problem was that the film felt kind of…small. He missed the climbing graph of fear and tension. The ghost should be more frightening. (Like, a scary housewife.)

I got to work on revisions, throwing in some gaspy moments, like an unseen hand suddenly roiling the bathwater as the mother lies soaking in the tub, a fire spontaneously erupting, a door opening onto thin air, and the reveal of a horrific trauma in the ghost’s past. But it still didn’t feel like a Spielberg movie.

In the end, it wasn’t. I waited for notes so I could complete the polish on the script. The word came back that they didn’t know what they wanted. I had done exactly what they thought they wanted. It turned out they wanted the wrong thing. Laurie and Walter wondered if the basic story could be sexier. But sexy wasn’t Steven’s thing, and he moved on to Jurassic Park. I had to move on as well. I was juggling two other script jobs, and a film I’d written and would direct (The Hairy Bird aka All I Wanna Do) had gotten its financing. I asked DreamWorks for, and received, an honorable discharge.

(Years later, I ran into Steven at the sixth grade graduation of our kids from the Ethical Culture School. “By the way,” he grinned, “we’re making your movie.” I phoned my agent: was this true? – “Oh, he’s just saying that. I haven’t heard anything.” Three years after that, What Lies Beneath was released, with Robert Zemeckis directing; it had been rewritten as a sexy ghost story with a scary husband.)

Back to 1996: my breakneck writing marathon was over. As I re-entered the atmosphere and splashed down in my life, my nerves were a tangled mess. For one thing, I badly needed to withdraw from Werthers. And I had no idea how to create calm for myself, in the moments when I wasn’t working or mothering. Unless…

Suddenly I remembered that I had a mantra. My family and I had lived in Paris back in 1990 while making the film Impromptu, when I decided to take up meditation. I received private lessons at the local Transcendental Meditation center. I loathed my teacher, who delivered his instruction robotically (in French of course) with a sneer and eyes half-closed; they flew open whenever I interrupted with a question, as if he had received an unpleasant jolt. I felt he was much better suited to be a waiter than a spiritual teacher. But I was committed to six lessons before he would give me my mantra.

Finally the day came, and I arrived at his office for the induction ceremony, bearing the symbolic offerings of some oranges and a white silk cloth. We were seated on the rug together half-lotus style (an excruciating position for my knees), when he leaned over and whispered two syllables in my ear. I am pledged never to tell anyone my mantra, but I will say that it has a guttural French r in it.

He announced we would end the ceremony by meditating together. I closed my eyes, feeling impatient to leave and be rid of him, and started silently chanting my new and personalized mantra. And then, suddenly, my thoughts fell away and I found myself seated on the wide wooden floor of an open-air temple. Hanging from the columns, gossamer yellow drapes wavered in the breeze. A cobra came toward me, sliding over the floorboards in silken undulations and pausing in front of me. Though I was terrified of snakes, this one’s presence seemed perfectly natural and in the order of things. As the cobra lifted its head, a man’s face appeared inches away from mine, blotting out the snake: a long-haired, bearded Indian man; he smiled, opened his mouth, and blew lightly between my eyes.

And with that, the temple disappeared. I was back on the rug with my waiter-teacher, who was looking at me inquiringly. “Alors,” he said, “was that agreeable for you?” I told him what had happened, describing the Indian man and how he huffed on my “third eye.” My teacher’s expression changed to something human like surprise. He got up, fetched a framed photo from a desk drawer, and wordlessly showed it to me. “That’s the man,” I said in amazement. The longhaired gentle-faced Indian man in the photo was my teacher’s guru.

At home, twenty minutes twice a day, I began my meditation practice with great optimism. I felt singled out for specialness by a guru I’d never met, and consequently I expected mucho magical mystery tours whenever I went into trance. Nothing much happened, however. My two daily sessions dwindled to one after a while, and then I stopped altogether, for the same reason so many do: after a while, calm is boring.

But then came Spielberg and the “Untitled Ghost Story” saga: now, in my crazed state, I needed nothingness like nothing else. I dusted off my French mantra, cranked my knees into half a lotus, closed my eyes…. And so began the greatest spiritual adventure of my life.

Unless you count my first acid trip.