Tom Hulce received the go-ahead to direct a workshop of my musical Sleeparound Town. Artistic director Andre Bishop gave his blessing, in his distinctive echoing-in-the-crypt bass voice. Playwrights Horizon was a hothouse of talents who would go on to rule the New York theater for decades to come. I should have been ecstatic.

Instead, I felt queasy. Following the New York Public Theater debacle, I had amputated my songwriting arm and buried the limb in deep soil, along with the show I’d secretly written with the help of a dead composer. There was the chance, in re-attaching the appendage, it might never work properly, and it would always carry the faint odor of past failure. If the show hadn’t worked back then, why would it work now?

While we auditioned prepubescent kids for the five roles, I had to write new material. I moved a rented spinet into my tiny apartment, poised my hands on the keys, and…

I couldn’t remember how to do it.

I’d always prided myself on venturing outside the pop norm to come up with unexpected harmonic changes. I used to let my fingers do the wandering. Now they didn’t want to go anywhere.

What to do? I thought of John Lennon, whom I’d known when he was at his creative nadir. He admitted that his process had sunk to copying chords from someone else’s song he liked, playing them over and over while groping for a new melody. (He even pilfered lyrics from a song I was working on: pretty low, if you ask me.)

I thought of another time, when I was at singer-songwriter J.D. Souther’s house in LA; I noticed his piano stand was empty save for a hymnal. “Cribbing chord changes?” I teased him – which I could see, from his expression, was true.

Now I sat at my spinet, swallowed my pride, opened a hymnal, and started stealing. I even stole from myself, putting new lyrics to songs I’d already recorded, back when I was afire with ideas.

Thankfully, nobody noticed I was running on empty. The workshop played well to an invited audience. Andre gave us a small budget to mount a workshop production in their little black-box theater, which was the next step before a full production in the big theater with critics invited. While Tom Hulce struggled with set problems, playwright Peter Parnell was brought in as dramaturge, to help me create a story through-line to connect the songs. We never found one. 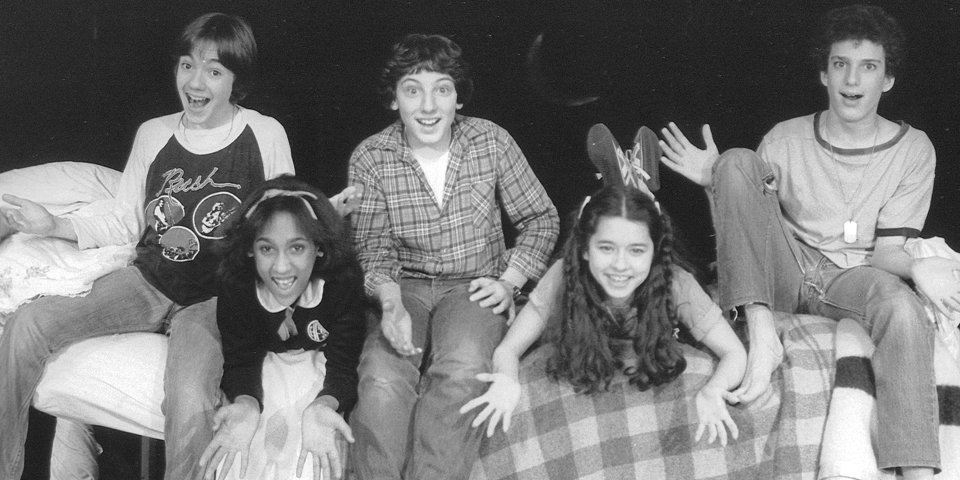 With persistent flaws intact, Sleeparound Town ran for a month to subscriber audiences. (the theater had no elevator: it broke my mother’s heart that she couldn’t see the show, unable to get up and down four steep flights with her crutches). Still, the response was good enough that Andre decided the show merited a full production if a new director could be found, since Tom was off to shoot Amadeus. And he had just the guy, a Playwrights Horizons favorite son, who had just co-written and directed a hit musical for them. This paragon had seen my show and was interested. He loved working with kids. As a writer, he could help me shape a book for the piece. Cute, too. Probably gay. Oh, he wasn’t gay? Even more fun.

However, he had commitments that might take a year or two. Andre was convinced that no one else could make Sleeparound Town shine at last. We would wait.

I rolled my eyes. This was exactly the situation I’d landed in at the New York Public Theater with Joe Papp. Joe wanted one director only, who was enthusiastic but constantly waylaid by other projects. I’d waited three years, but he never got around to my musical.

By my calculation, it has been almost thirty years that I’ve waited for Andre’s golden boy to direct my show. But the guy keeps being too busy.

In the meantime, I married him.

I never worked in the theater again. Indeed I’d never have gone near the theater at all if my grandfather had not disturbed my sleep with urgent music from the afterlife, prompting me to create the series of songs that became Sleeparound Town. Before then, I wasn’t even a theatergoer.

“What was it for?” I asked Grandpa, pestering him with this question whenever I thought back to all the madness and labor that went into the show – a waste of time, since it never got before the public. I didn’t actually expect an answer; everyone’s life has its portion of failures. But the answer did come.

In 2005 I went on a grueling four-day trek on the Inca Trail to Machu Picchu. Each night my friend Barb and I would confide deepest secrets in our tent (it was pitched on a slope, so we woke up huddled at the bottom every morning from sliding down in our sleep). I told her the story of Grandpa’s insistent presence in my life, guiding me where I didn’t always want to go. “I never could figure out what, in the end, he wanted – why I had to go there,” I said when I finished. Then it came to me.

That trip through the Andes was full of eerie epiphanies and magical manifestations. There, on giddy high ground, I suddenly realized that my grandfather had not just been feeding me music; he also made a big poltergeist to-do whenever I took up with the wrong man. The music was meant for getting me to the theater on time, where the right man trod the boards. The show Grandpa prodded me to compose was the only way I’d ever meet my husband.

“Pretty neat trick,” I whispered to the ether as I continued up the trail. Then I uttered the two little words my grandfather had waited twenty years to hear: “Thank you.”

For anyone interested, here are two songs from Sleeparound Town.

This demo of “Bonnie Boudreau” was a home recording circa 1982. The first few bars came from the hymnal. In the show, Jason Underwood performed it along with a piteous clarinet solo.

If she ever thinks about me

Wonders who I really am

Of course she will ask her friend

Who will say, he’s a pain

And that will be

The end of that

No hope, no hope no hope for

Walking under my window

I watch her below

And my eyes overflow

Through my tears she seems to glow

“Wonderful Dog” is from the original five song suite. I recently re-recorded it. My dad always liked the music because it sounded like he wrote it.

Never late or breaking the rule

Since you were a twinkle in your mom’s eye

You can also be lazy and dull

Don’t have to live up to your potential

When I was a little thorn in my mom’s side

She said she cried

From banging my head against the wall

They’d be overwhelmed if they knew what I know

From what I saw

Grandpa was took away in a zipper bag

Tuesdays they pick up the dirties

Fridays they deliver the cleans

Benedict Arnold was a traitor

He was buried in a garbage can

Don’t cross your eyes or

They will stay that way forever

You see now how I am cunning

I pretend I am a dummy

I think that is smart, don’t you?

I can light your ears and smoke your tail

Soon you will be old and biting babies

You’ll have bad breath and a limp and rabies

And when you get the electric chair

I will be there

You must say to God that you just did

What you were told