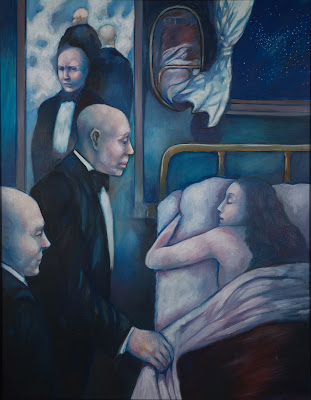 It always amuses me to listen in on people debating whether or not ghosts exist. For me, there’s no debate. I have one.

When I was 27 I didn’t believe in life after death. The proof just wasn’t there for me. In that same year, on the recommendation of a friend, I visited a psychic (Frank Andrews) for the first time. I had a problem.

I had moved out on my boyfriend and was temporarily without digs, spending nights in an upstairs guest room at my parents’. I’d never used this room before, but after I went to college my old bedroom had been taken over by my dad as a study. I didn’t sleep well from the beginning in this unfamiliar room. I would start to fall asleep, and then strange things would happen: sounds like something rolling across a wood floor (the room was completely carpeted) or once I had the sensation my head was in someone’s lap who was stroking my head. Another time, I felt my toes being yanked sharply, as if someone was impatiently demanding my attention. I was frightened, and didn’t know where to turn for help. A friend suggested I see this psychic.

Towards the end of the reading, and without my prompting, he mentioned there was a spirit around me. “It’s male, and you knew him. Don’t worry,” the psychic said, “he’s protective.”

I returned to the guest room without fear, and was able to identify, from clues in the room, exactly who my ghost was. In fact, I don’t know why I didn’t see it right away.

My grandfather was not someone I remembered much of. We didn’t see him that often. I recall his knees and his fancy cane. I recall the circus he sent us tickets to. I recall his house in New York City. He died when I was eight.

But here in this room were his furniture, his books, his portrait, and a bas-relief of his family crest. My parents had stashed all these things up in this guest room to keep them out of harm’s way (we were five rowdy children and a couple of dogs).

The question remained: why me? Why was he trying to make contact with me? I stood and addressed the room: “I know who you are now. I’ll try not to be afraid anymore, if you find some way to communicate with me that doesn’t frighten me as you’ve been doing. I’m open to knowing what it is you want from me.”

Thus began a relationship between a family phantom and myself, which has endured, off and on, until the present.

Posted by Sarah Kernochan at 5:32 PM