(Those who are coming to this serialized story for the first time, you can read the complete opus to date by clicking here.)

I will state at this point that I have never seen a ghost. I neither saw nor heard my grandfather. I think it would have terrified me. That was our deal, from the beginning: that he would do nothing to frighten me in the course of our contacts. Communicating in in that foyer between dreaming and waking was far more productive. When it came to an occasional glass shattering or a door opening by itself, these manifestations were actually kind of welcome. They proved to myself, and to any witnesses present, that I was not making it all up.

But others saw him. One friend who really did see dead people – she became a professional medium a few years later – reported seeing a man with a moustache behind me, and that he stuck his tongue out at her. This would be entirely in character. My grandfather apparently had a juvenile sense of humor; he loved bawdy limericks and potty jokes. One time when my dad visited him in the hospital, the nurse knocked on the door and Grandpa yelled, “Who goes there? Friend or enema?”

Another time he was sighted was in Martha’s Vineyard, six years ago. I was in charge of renting out Grandpa’s old beachfront cottage, the house where he died in 1958. A tenant and his family were in residence for the month of July. Midway through their stay, the father approached me to ask if there was by any chance a ghost in the house.

“Maybe,” I answered evasively. I was surprised because no renters had ever reported any paranormal activity.

He told me about two incidents. In the first, his wife had been alone in the house, puttering about the ground floor, when she plainly heard someone coughing upstairs. She called her son’s name but, upon glancing out the window, realized he was outside on the lawn. By now throughly creeped out, she went outside, grabbed her son and made him go upstairs to look around. There was no one there.

The second incident, which prompted her husband to speak to me, concerned their twentysomething daughter. One evening she was bringing some groceries into the service entrance when she encountered a tall gentleman with a moustache who politely escorted her to the stairs and waited as she opened the door and went inside. His presence was so benign, his demeanor so very nice, that it wasn’t until she put down her bags on the kitchen table that she realized what had happened and freaked out. By then, of course, he had vanished.

I was kind of jealous, to be honest. It felt like he was cheating on me. He was mine. What was he doing, popping in on some complete strangers? Well, I guess he was still the sociable sort he’d been in his lifetime.

The other thing that bothered me was that his behavior, as reported, had been typical run-of-the-mill ghost stuff. There are plenty of reputedly haunted houses on Martha’s Vineyard and Chappaquidick, enough so that there are “ghost tours” for the tourists during the summer. Now and then there are sightings of whaling captains’ widows and tavern owners and the like, always associated with a certain place they’re attached to.

But, in spite of the title of this story, in my mind grandpa was a spirit, not a ghost. What’s the difference? I think of ghosts as being the after-image of a human life that has not fully retracted from the mortal world. They cling to place, and often pursue the habitual routines of their former existence. Sometimes they are unaware they can leave. Sometimes they have unfinished business. But they associate with a specific locale or an object.

Spirit, on the other hand, is an elastic filament from the departed soul which can extend from its natural dimension into our dimension, kind of on a visiting basis. Like angels – except with more personality traits, such as a preference for dirty limericks. Grandpa wasn’t stuck to one place. He could turn up anywhere I went (except Morocco, where I really could have used him, but that’s another story).

I have a photograph of my grandfather standing behind my dad, and that’s the way I sometimes picture Grandpa: looming behind me, keeping me company, an advisor, protector, and sometimes a pain in the ass. I can’t see him, but I know he’s got my back. 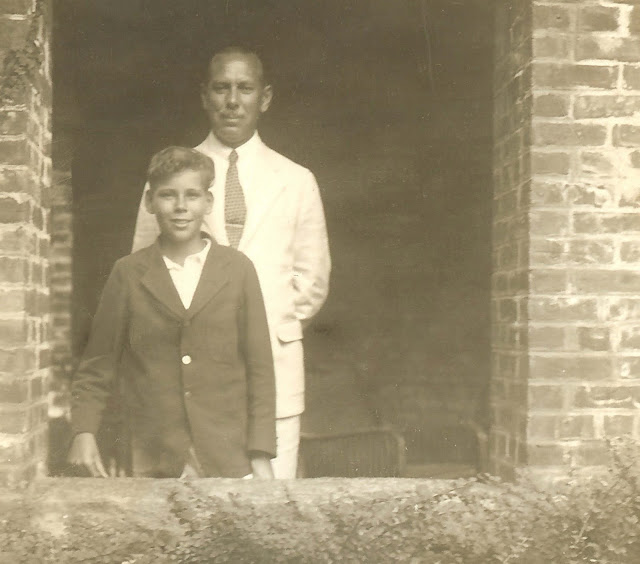